Attention must be paid.

Attention must be paid.
Unless someone like you cares a whole awful lot,
Nothing is going to get better. It's not. 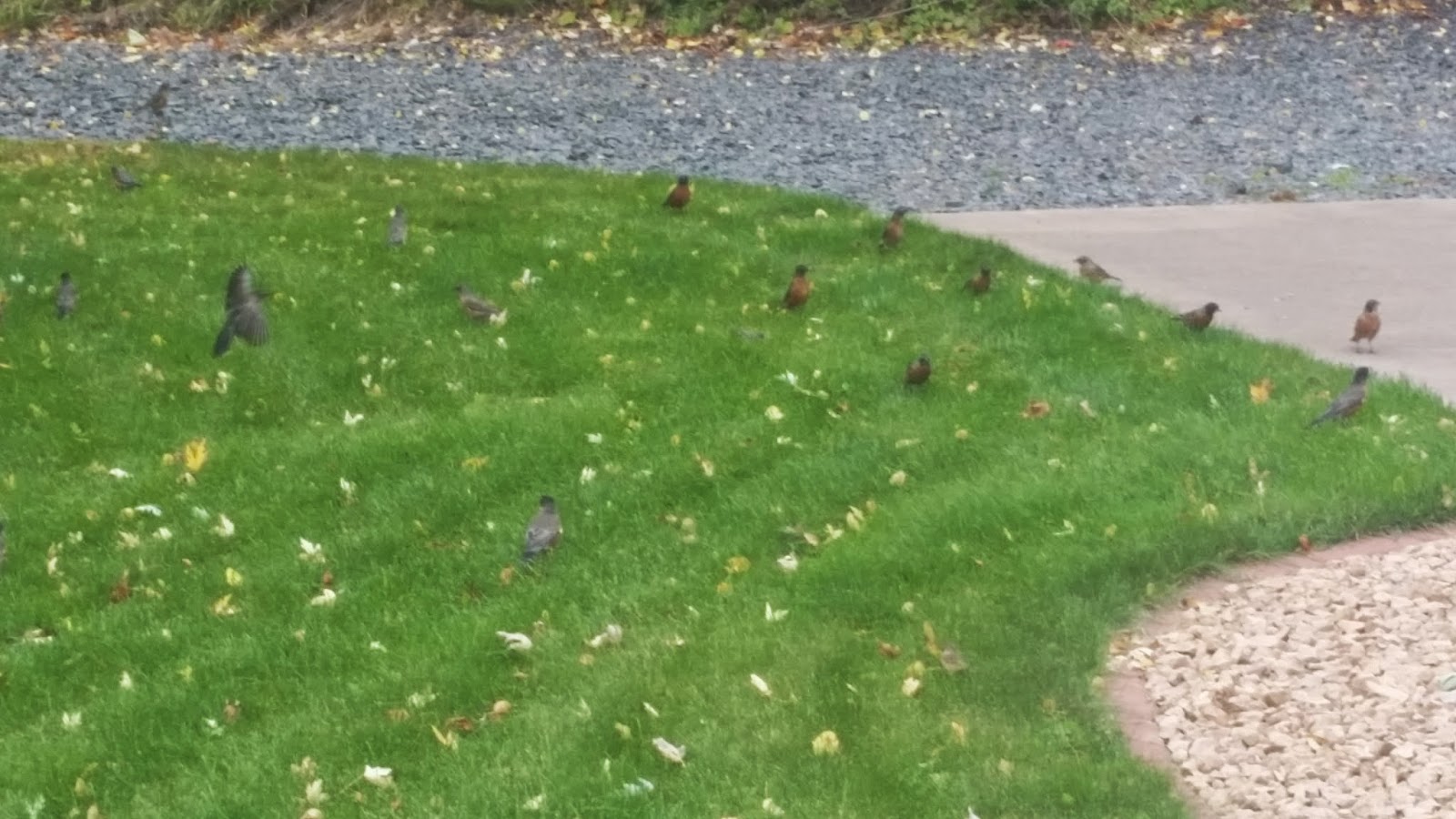 On October 4th at about 1:00 p.m. about 100 Robins landed on the lawn around our house on the Woodland/Pleasant View hillside of Duluth.  The photo below only captures a few of them.   We have had various birds hitting the house, but only getting stunned.

However, I did find one Yellow-rumped Warbler and a Dark-eyed Junco that actually died over the weekend.

On Saturday, the 4th. Oct. On the way to Duluth we observed thousands of mostly White-Th. Sparrows and Dark-eyed Juncos on Hwy 4. There were some warblers also. Most of them were feeding on the sides of the roads and I don't think we hit any.  As we were doing errends in Duluth we also noticed many warblers moving from the lake up the hill, even weaving in and out of traffic. Because the traffic was moving slowly there were probably fewer killed in the city.

We attended a play at UMD and exited through a door in the Civil engineering building about 9:30pm. There were birds lying dead on the sidwalk just through the exit. I counted at least 8 Magnolia warblers, a couple of Yellow-rumped warblers and one Tennesee which was stunned, but showed no blood and wings intact, so I hope he survived. The doorway had tall windows above the exit and was brightly lighted from within. I cringed as soon as I saw the dead birds, knowing that the same catastrophy was undoubtedly occurring  at many other windows on the campus. We have written a letter to the Chancellor at UMD to inform the University of our concern.

I did go to the website mentioned in Sam Cook's column, "birdsavers.com", but it is a company that manufactures screening devices. I have had success on my home windows with the decals of hawks which you need to affix to the outside of the window. I have also had success with simply taping strips of "engineering ribbon" to the outsides of the window. This is very inexpensive and can be taken down once all the migrants have passed through. I am really pleased that the bird-loving community is working on the Viking stadium window problem, but as last weekend's devastation should illustrate, we have problems closer to home also.

Thank you for your efforts to help solve the problem. Sorry this is so lengthy.

This adds:
8 Magnolia Warblers (I double checked with Audrey, who knows her birds, so this is likely to be accurate)
2 Yellow-rumped Warblers
1 Tennessee

Running total (includes birds injured, which have a 50% chance of survival)

How to Report Collisions

Send all reports as comments to a post on this blog or in an email to chickadee@lauraerickson.com. Send date, place, time (if known), species or description, and, if possible, a photo.

Get the word out!

I am not well known in Duluth outside of KUMD listeners and the birding community. Please help me get the word out about the importance of collecting this information. If any local or regional organizations get involved in this issue, all the information on this blog is freely available to them. Working toward the goal of preventing bird collisions in Duluth is the whole point.

If you find an injured bird

What to do with dead birds

I do not have a salvage permit to collect dead birds, and currently don't have a repository to suggest for dead birds picked up under windows. Without the necessary permits, it violates state and federal laws to pick up bird carcasses. If you know of someone at UMD or another institution with permits who would be willing to accept carcasses, let me know.